The experimental rules for the Kavenid Warfleet are downladable in the GRAVETIDES Beta rules page.

The first of the territories of GRAVETIDES to react to the spread of The Defiler turning itself into a Necrorealm, Kavenid takes its name from the ancient dynasty of merchants that centuries ago created their domain annexing a plethora of small trading city-states to their rule leveraging their superior wealth and mercantile skills.

Starting from this first seed the boundaries of Kavenid expanded fast as its armies always distinguished themselves for their superior equipment and training.

The reges of Kavenid always used magic at their advantage both in business and in war, two activities that they had always approached using the same methods.

The economy of Kavenid was stricken hard by the consequences of the rise of the seas level as its ports and coastal cities were forever lost after being overran by water.

When The Defiler started spreading into Kavenid both modifying the nature of its inhabitants and physically invading with their deformed armies, the realm even if finding itself at its weakest was anyway capable of withstanding the pressure of the forces of the invader, while the Kavenidish sorcerers feverishly researched an effective way of counterattack.

But when the truth behind the nature of The Defiler became clear, the sorcerers realized that the only way of escape was undeath, a twisted form of existence that seemed to be immune to the spreading of the magical parasite.

The first to be turned were the officers and the soldiers of the Kavenidish armies, followed by the members of the royal family who became the very first Lich Necroreges of GRAVETIDES.

The newly created army was finally capable of fending off the Defiler forces as the very presence of the undead troops seems to weaken the invader combatants.

Kavenidish necromancers are now renown for their power, especially expressed by their necroshaping spells capable to remold dead matter into the form desired by the sorcerer.

These magical capabilities are reflected by the presence in their war fleet of ones among the most strange and disquieting vessel in whole GRAVETIDES, like the imposing Drifting Mausoleum, the decaying Corpseship and the bizarre Bonerammer. 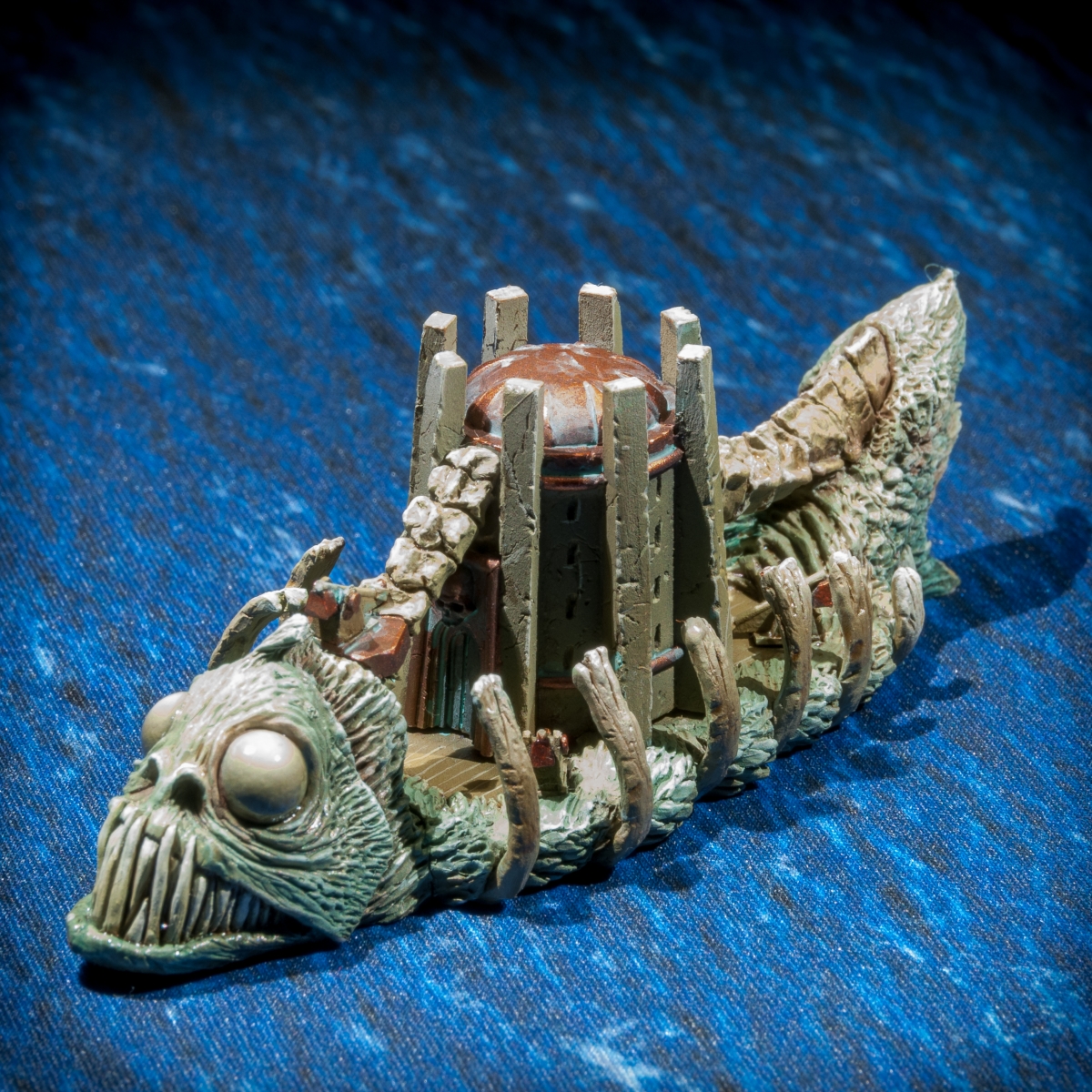 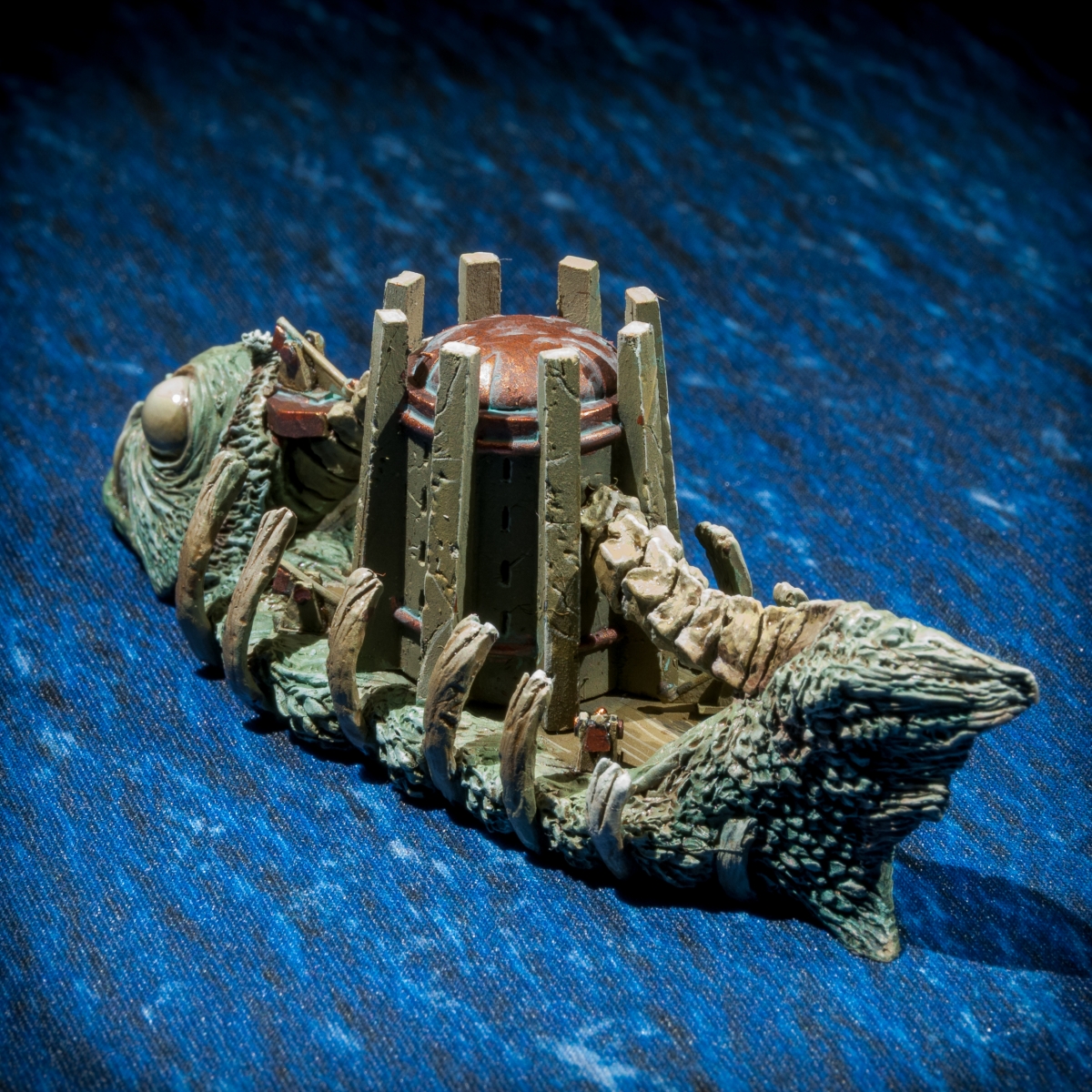 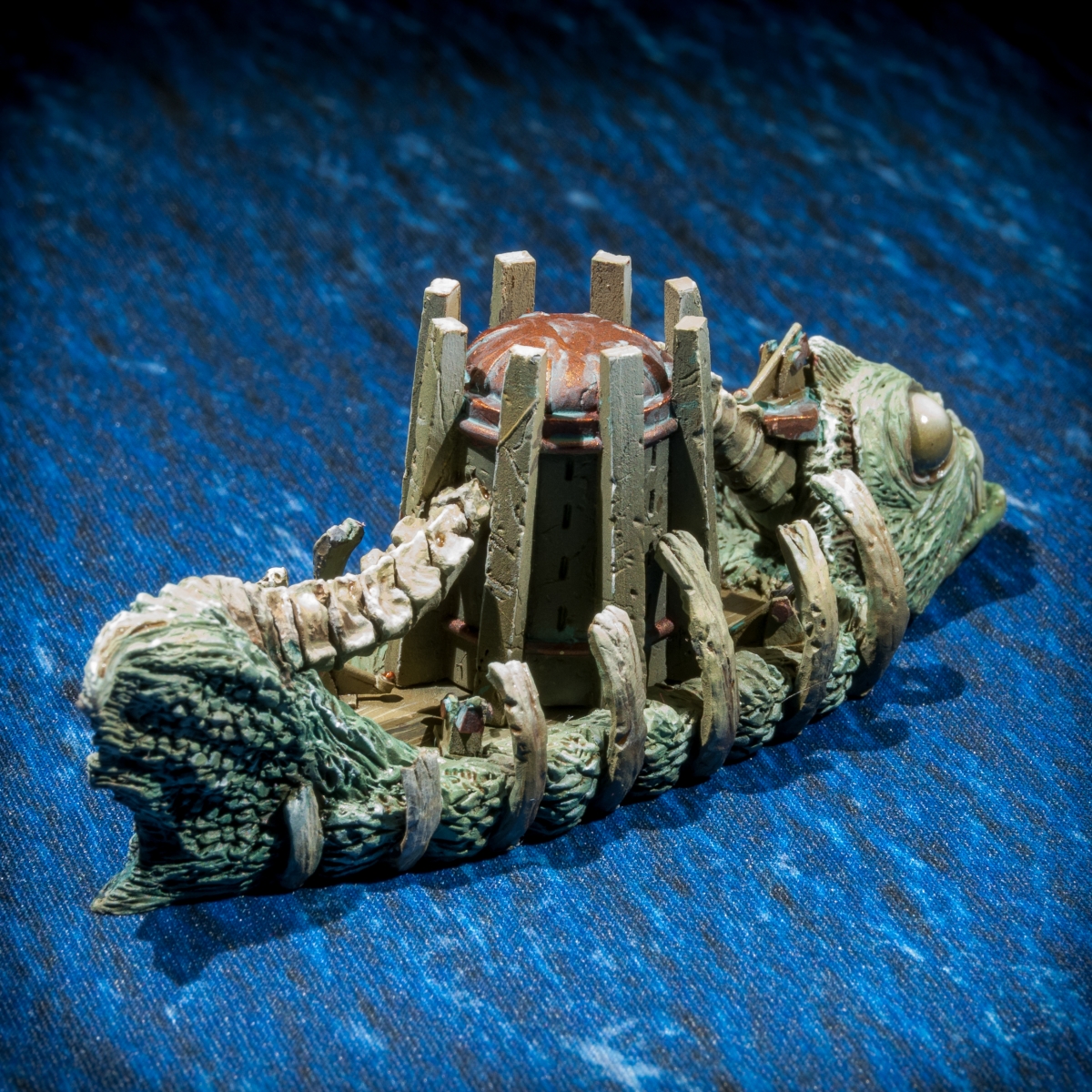 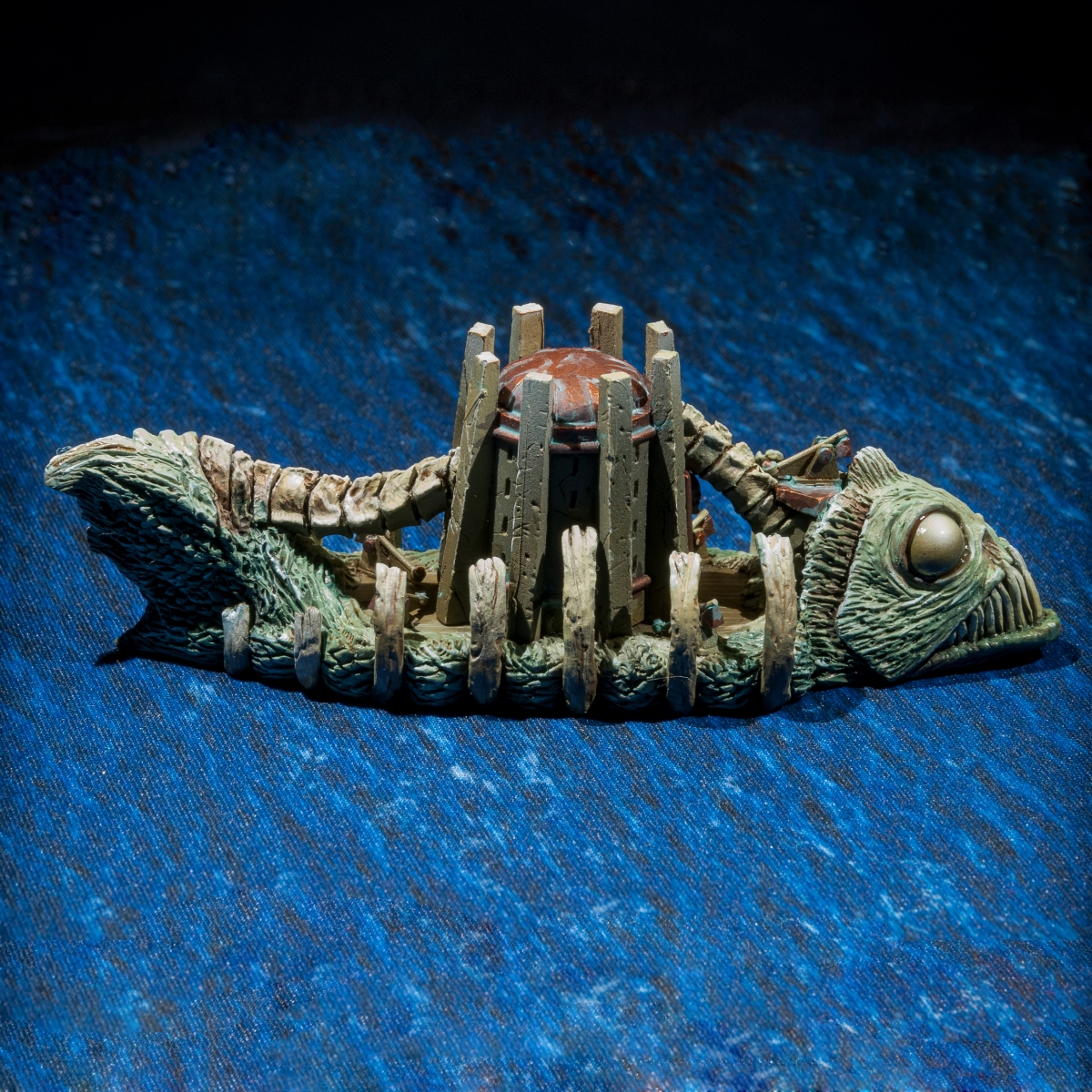 In the endless wars among the Necrorealms winning factions are sometimes able, after destroying its physical body, to take hold of a powerful Lich’s phylactery, the magical item (be it a gem, an inscribed scroll, or some other bizarre object) which contains the essential life force of the undead sorcerer.

Normally phylacteries are destroyed in order to obliterate the Lich from the existence but Necroreges may decide to keep them in order to create a Drifting Mausoleum, the greatest of the undead battle ships.

Drifting Mausoleum are a daunting and terrifying sight: constructed from the carcass of a giant abyssal fish or of some other marine creature, they bring into battle an imposing mausoleum that hosts, guarded by a circle of necromancers, the phylactery of a mighty Lich whose magical energy is channeled by sorcerers to fuel the ship movement and create the foggy miasma that permanently surrounds the warship.

It has been told that who dies boarding the Mausoleum is immediately turned into a new undead crewman perpetually bounded to serve on this horrific ship.

Giant catapults are placed on the bow and on both sides of the ship granting it a remarkable firepower.

The magical power exuded by the battleship is often used by the sorcerers on board on the Drifting Mausoleum to control one or more Corpseships that accompany the Mausoleum in battle.

The combined attack of the Mausoleum and the spectral ships can be devastating, even if inflicting enough damage on the battleship can interfere or utterly dispel the control of the Corpseships.

Due to the almost uniqueness of phylacteries it is unknown how many Drifting Mausoleums are actually in existence: having a Drifting Mausoleum disabled, or worse, sunk, can speak utter defeat to undead fleets as replacing this warship may be an almost impossible task. 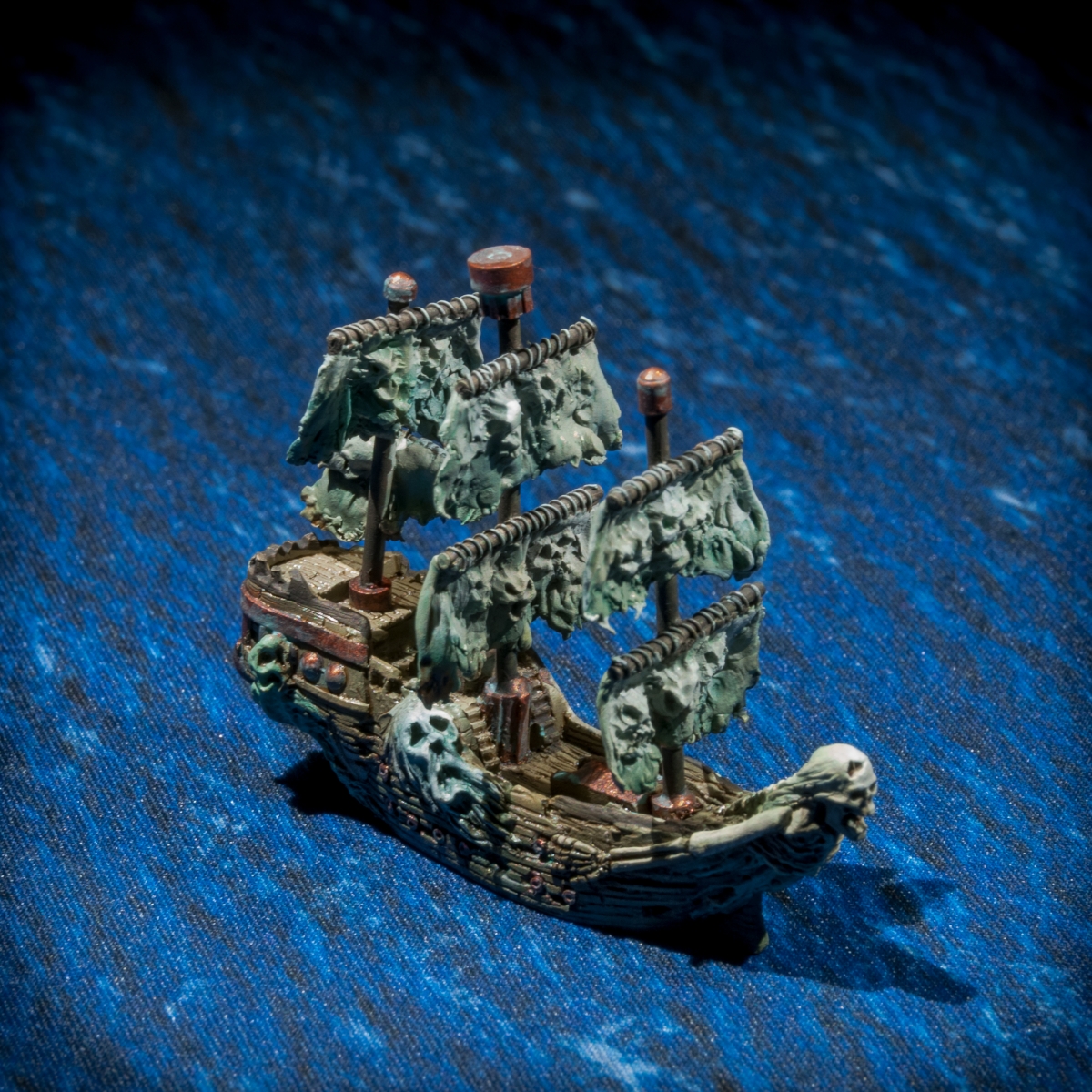 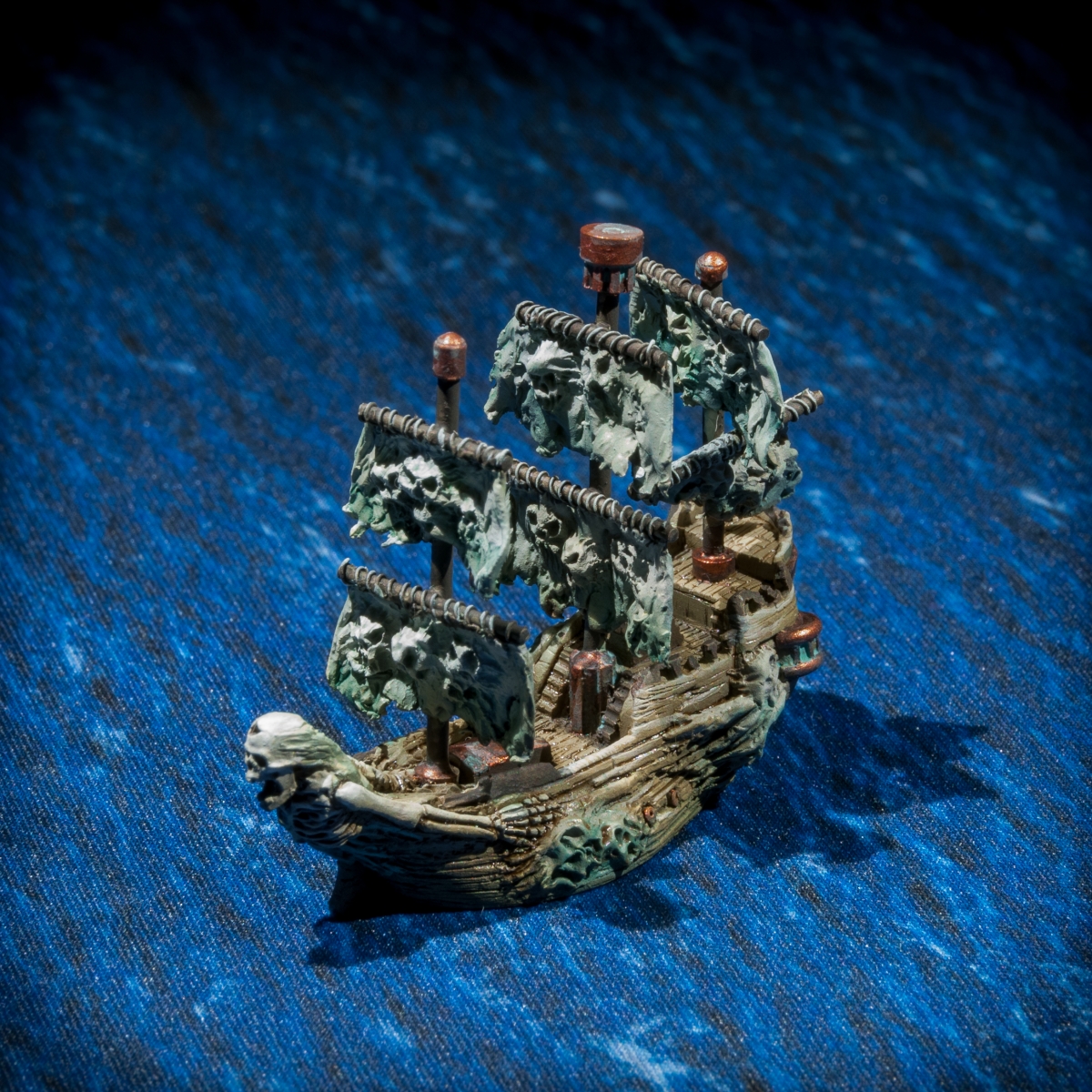 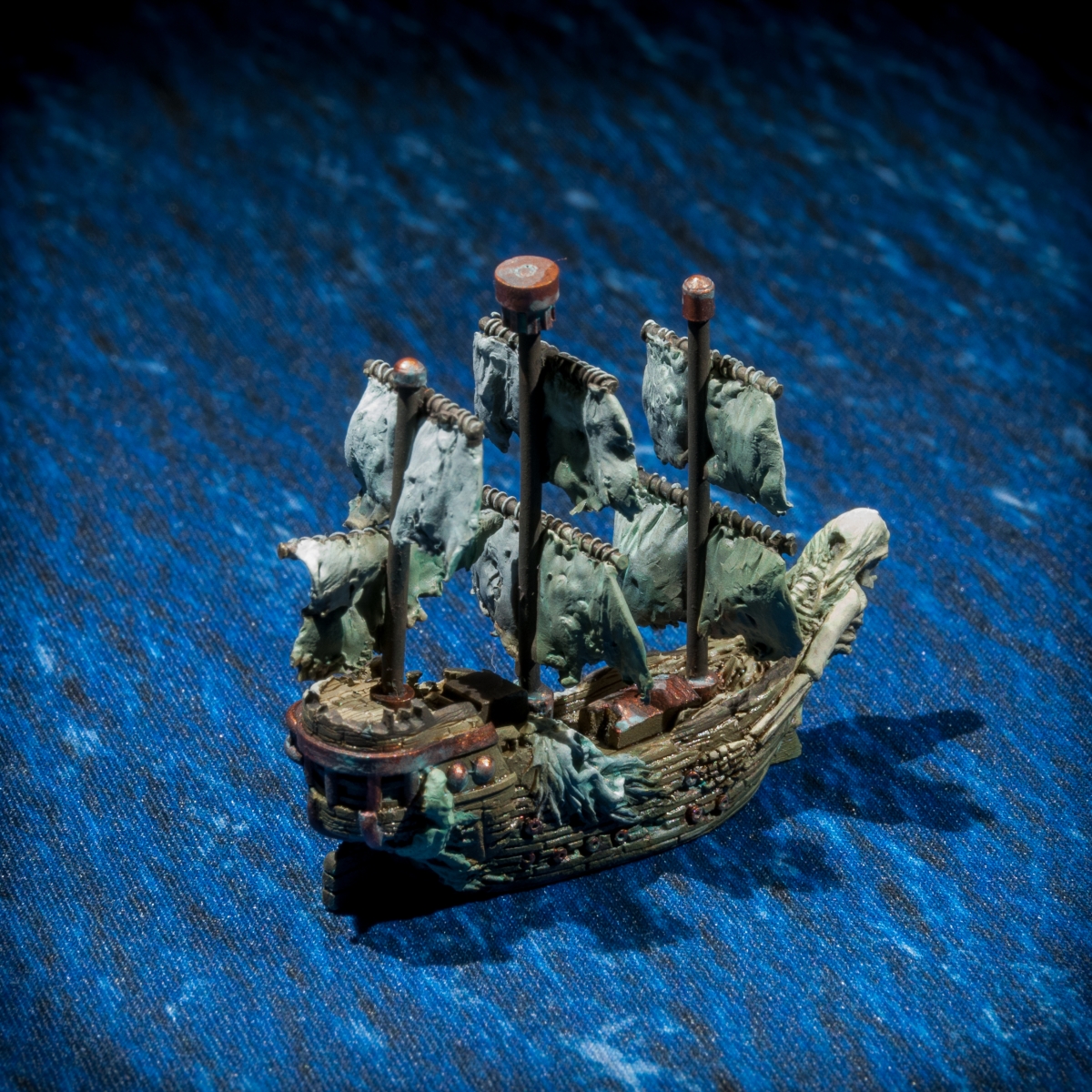 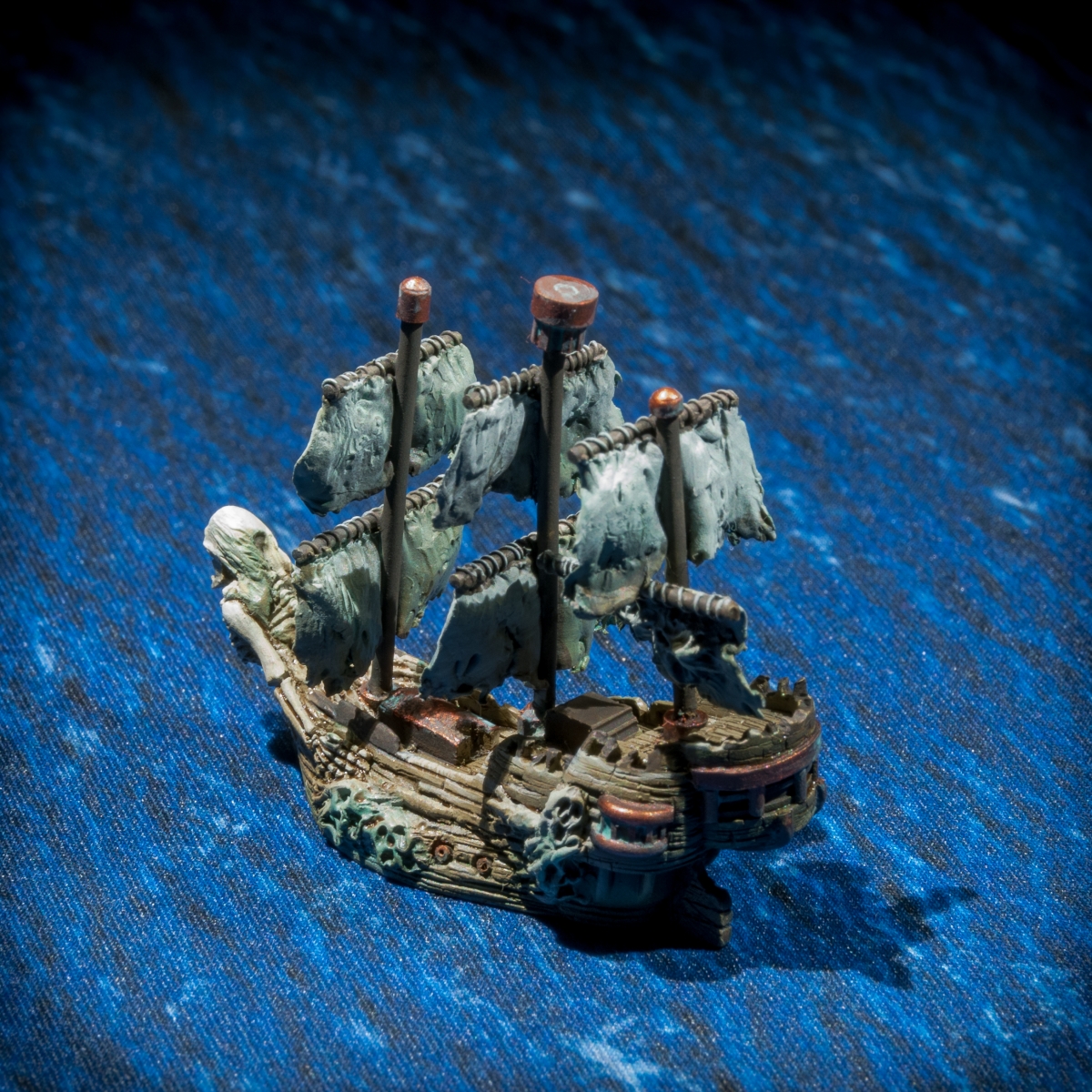 These peculiar form of necromantic constructs are raised by powerful Dreadspells from the depths of waters once theatre of naval battles.

Corpsehips appear as vessel-shaped conglomerates of remains, wreckage or even whole parts of sunken warships kept together by the souls of their crews, bounded by the necromantic spells to their once craft of membership.

Even if fueled by the wind, their large shredded sails, made from the very ghostly essence of the souls of long dead crews, do not fill even in the strongest of gales, giving their movement an eerie quality that add to the disquieting look of these warships.

The tortured forms of these once fierce warriors and sailors are still visible among the debris composing the Corpseship, as a low and continuous wailing coming from the vessel itself accompanies its slow but relentless slipping on the water.

The rotten and rusty cannons of Corpseships can fire magical spheres of ectoplasmatic matter mixed to random wood and metal detritus, capable of passing across enemy ships, ignoring even the thickest of armor.

These floating carcasses may seem to be frail and prone to crumble, but they are instead capable of suffering a considerable amount of physical punishment: on the other hand, magical attacks, and especially undeath dispels, can utterly destroy the vessel, making it to crumble into a floating carpet of wreckage.

Corpsehips squadrons are often bonded to a single Drifting Mausoleum, making possible combined attacks with the , but at the risk that the squadron will be automatically dispelled if the Mausoleum is somehow destroyed by the enemy. 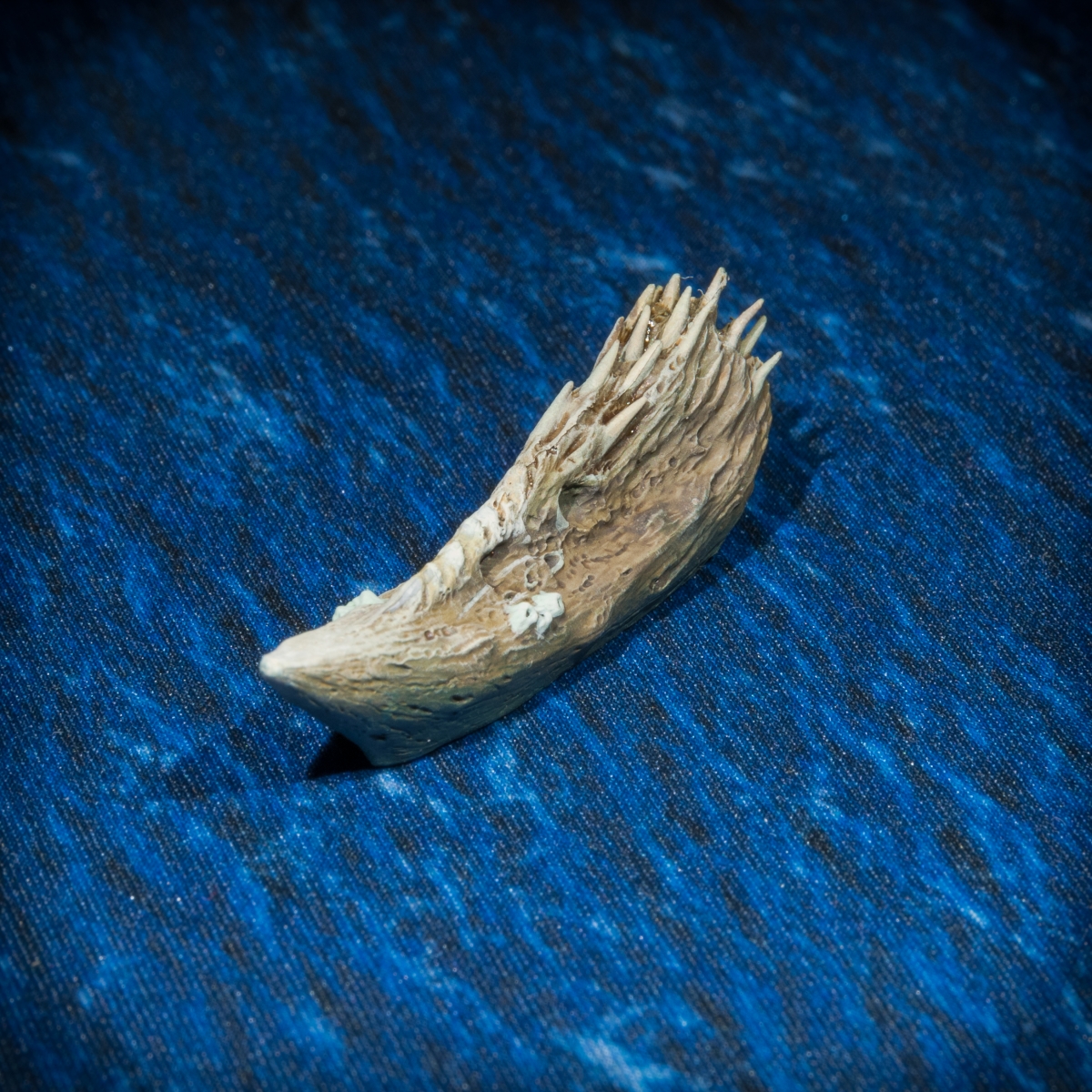 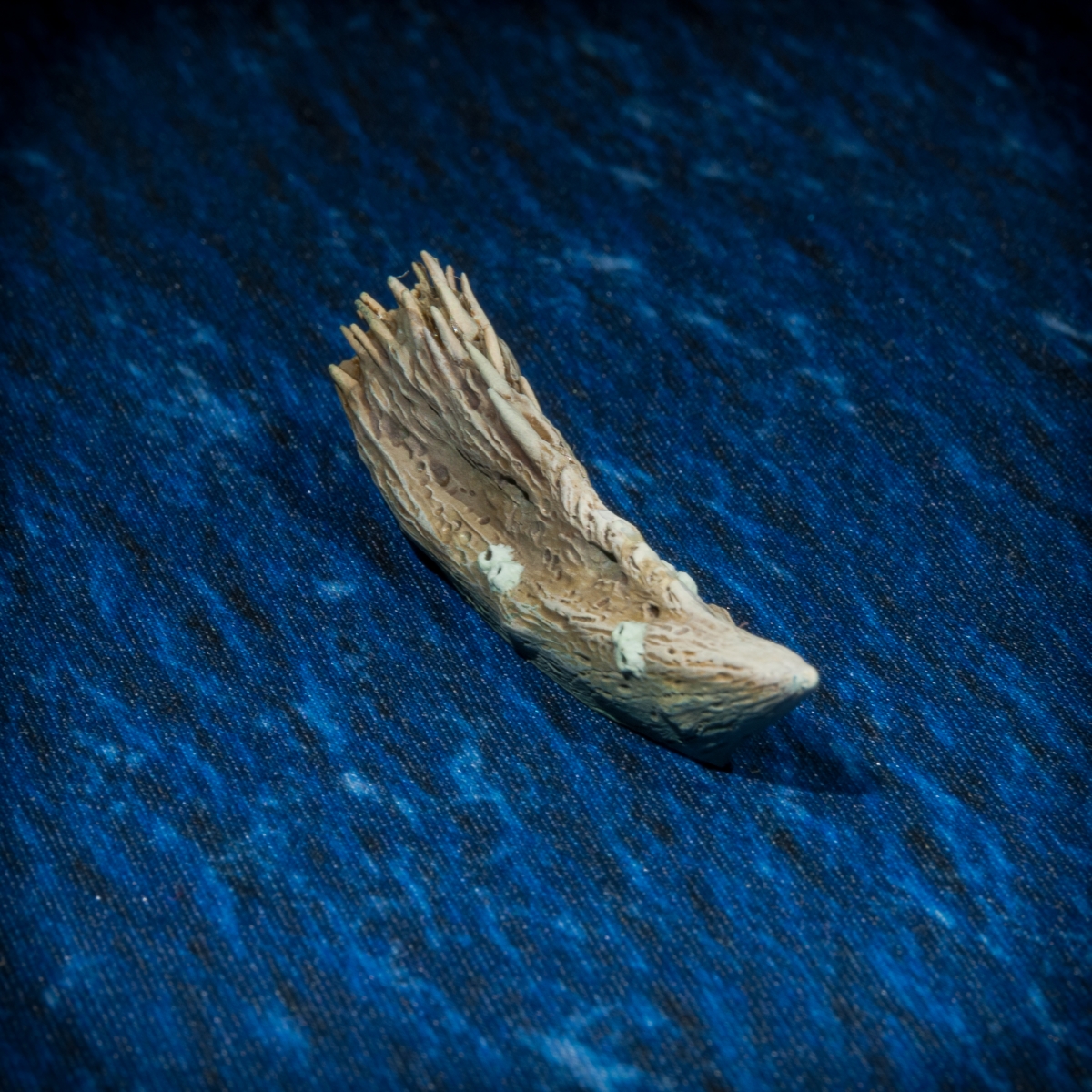 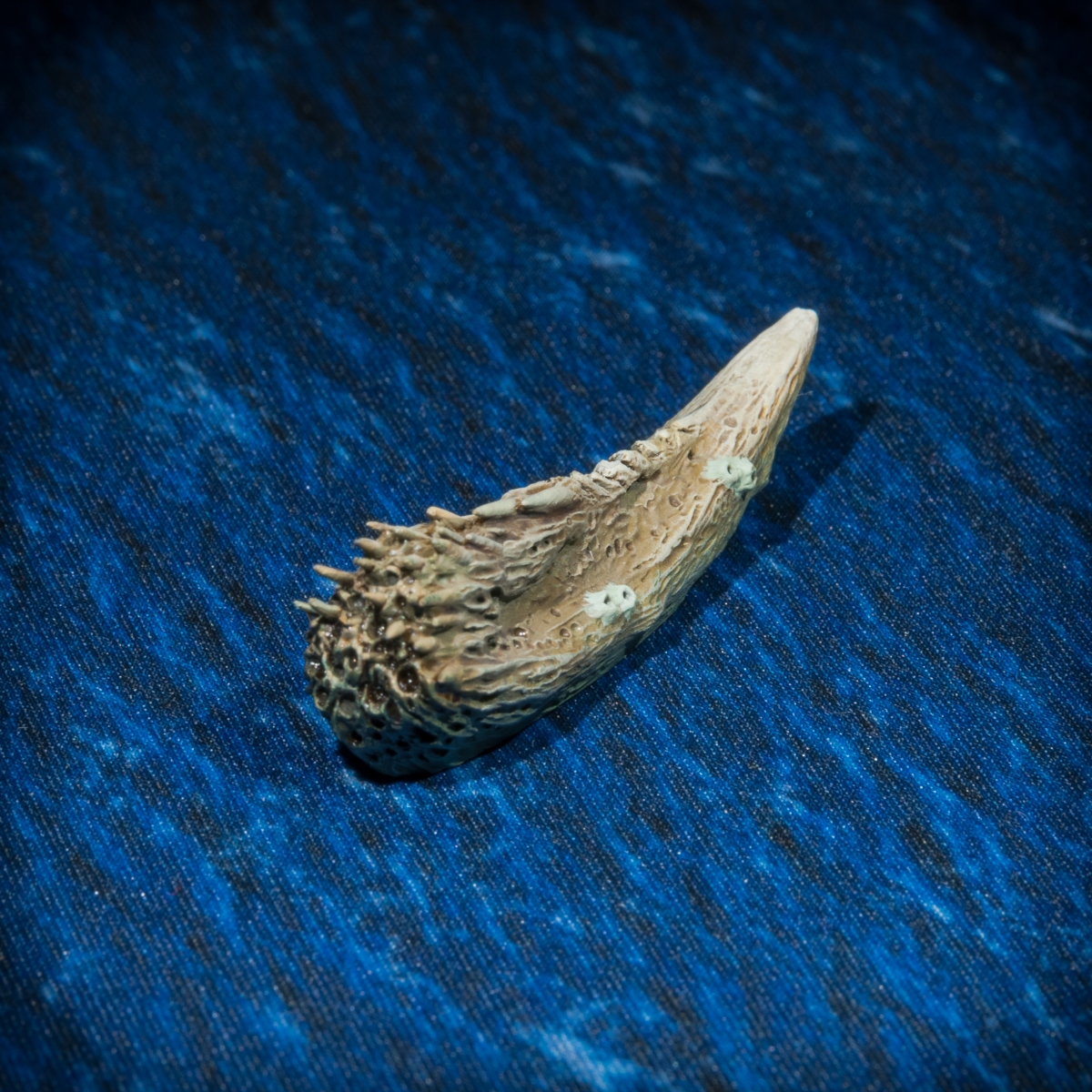 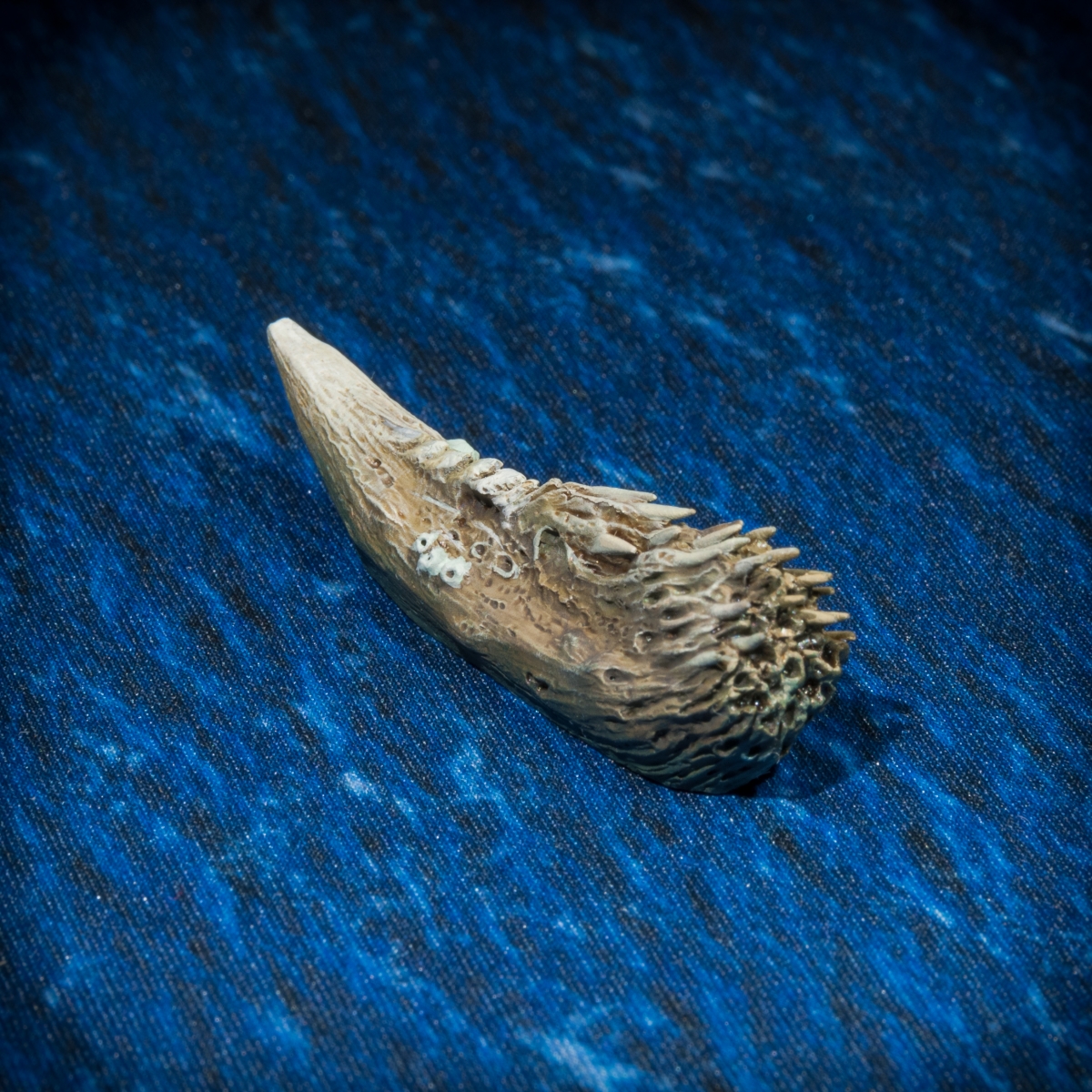 Bonerammers are strange and organic looking warships similar floating shells from some twisted marine mollusk or coral, created molding immense piles of dead bones through the use of necroshaping spells into vessel form.

These slick and agile warships has their most prominent feature is their bow ram that appears as a physical continuation of the hull itself.

Bonerammers are infused with magical energy that while allowing the ships, lacking sails, to move on the battle seascape can also be channeled through their ram adding to the already devastating damage it can normally cause when hitting enemy vessels.

When a Bonerammer is near enough to a DriftiBonerammerng Mausoleum, it is capable of channeling its magical energy, making it able to do even more ramming damage or to project a crackling flux of destruction that can hit enemy vessel from a distance.

The amount of energy Bonerammers absorbed from the Mausoleum cannot be controlled by the necromancers on board of the warship and it can consequently cause a powerful spontaneous discharge that can hit nearby allied ships or the Bonerammer itself. 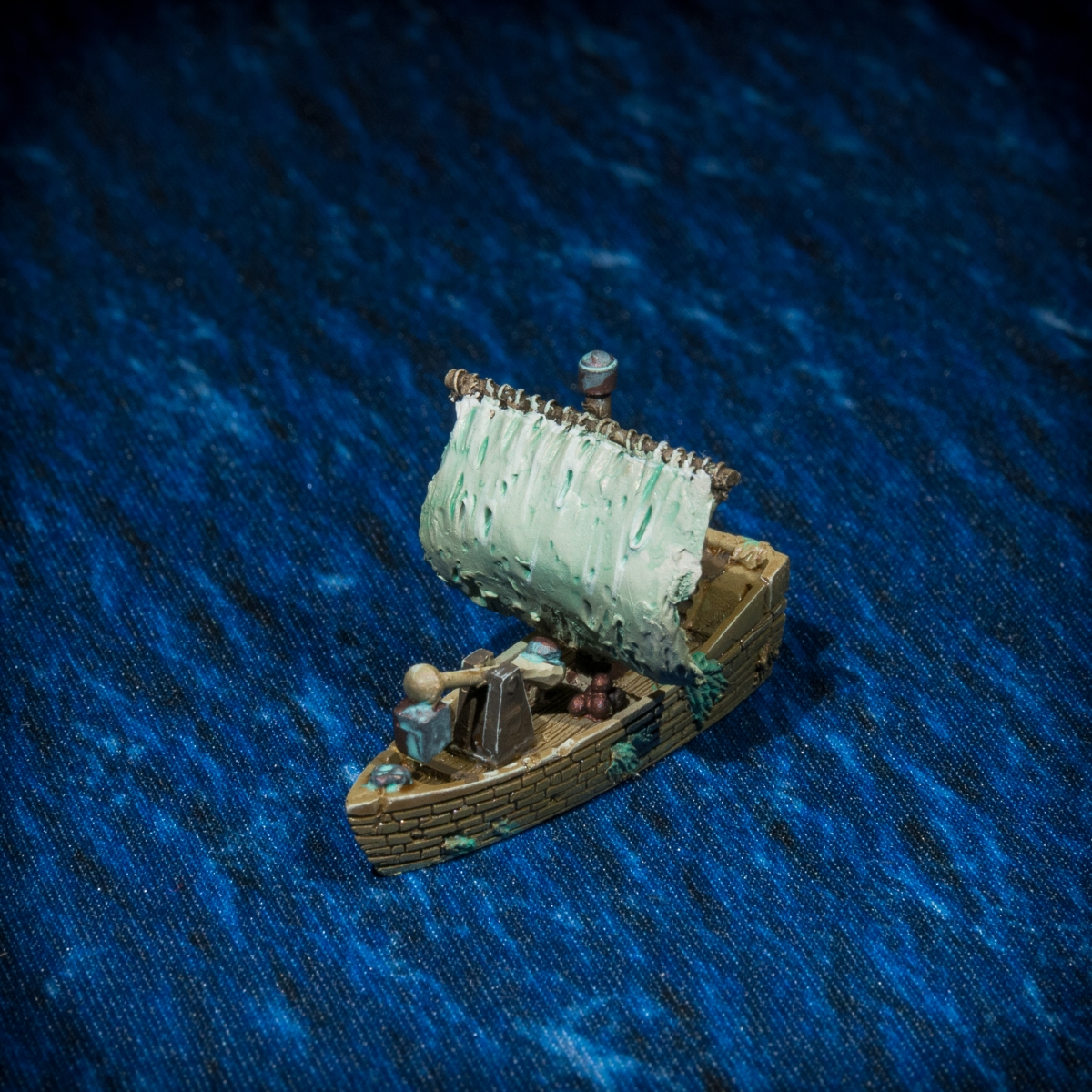 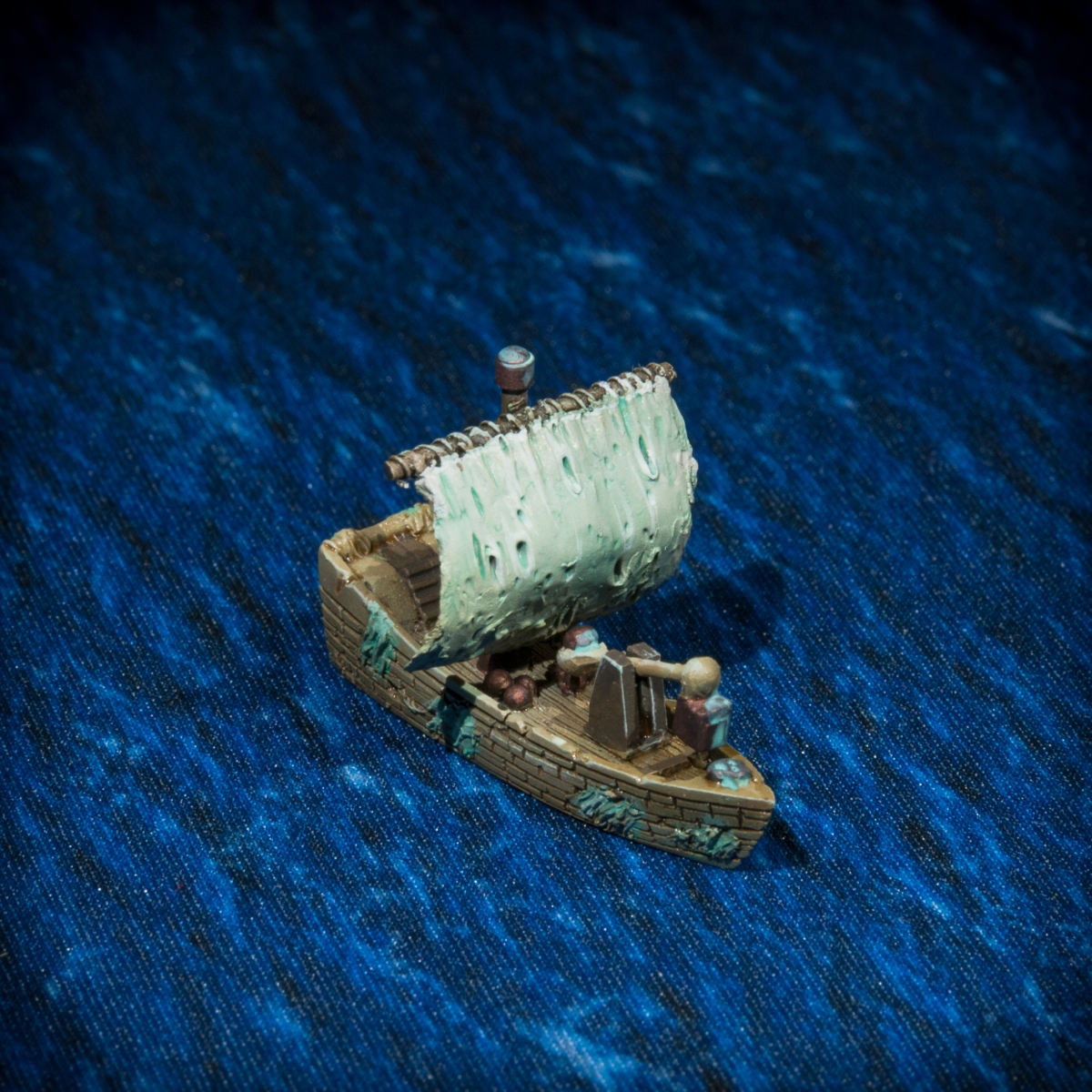 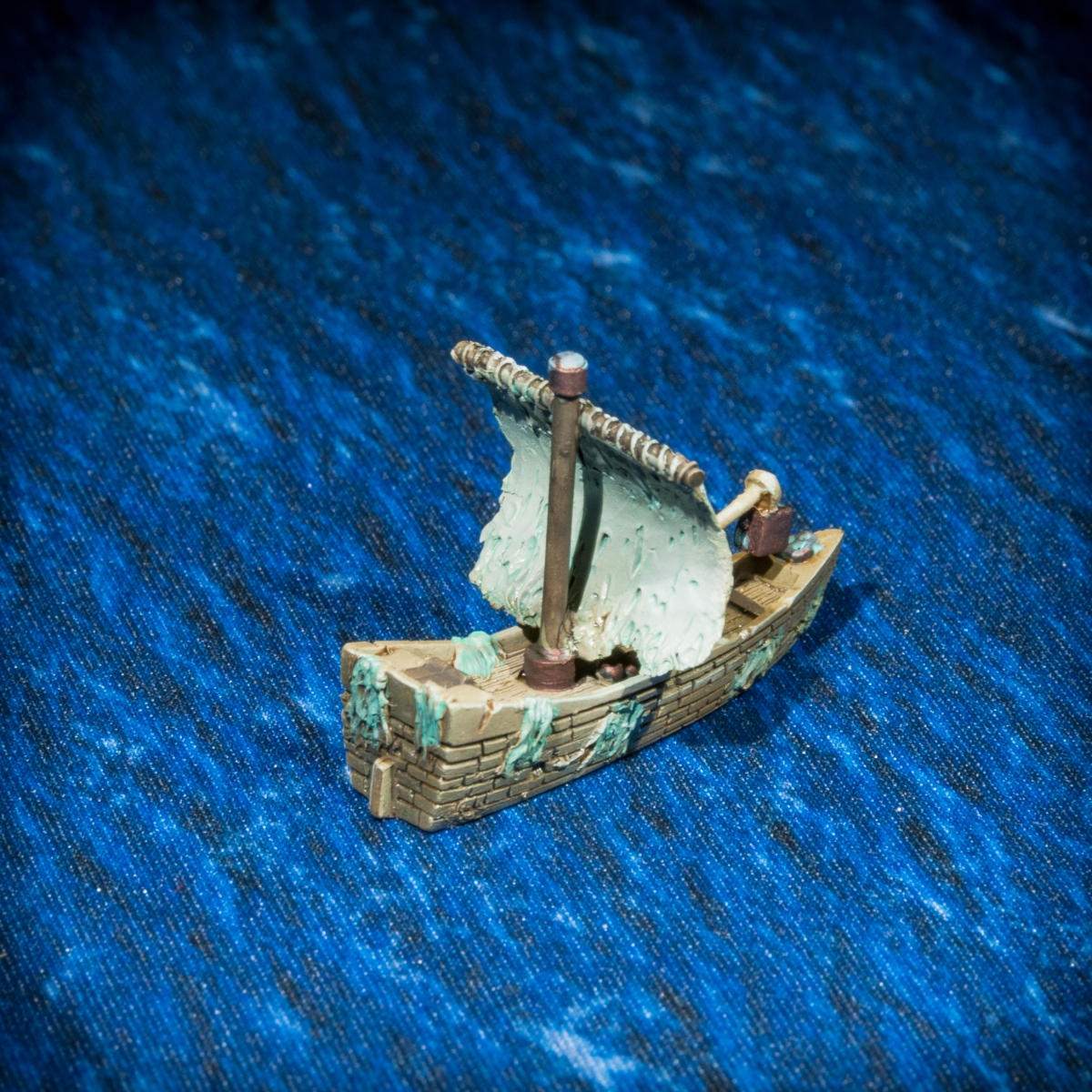 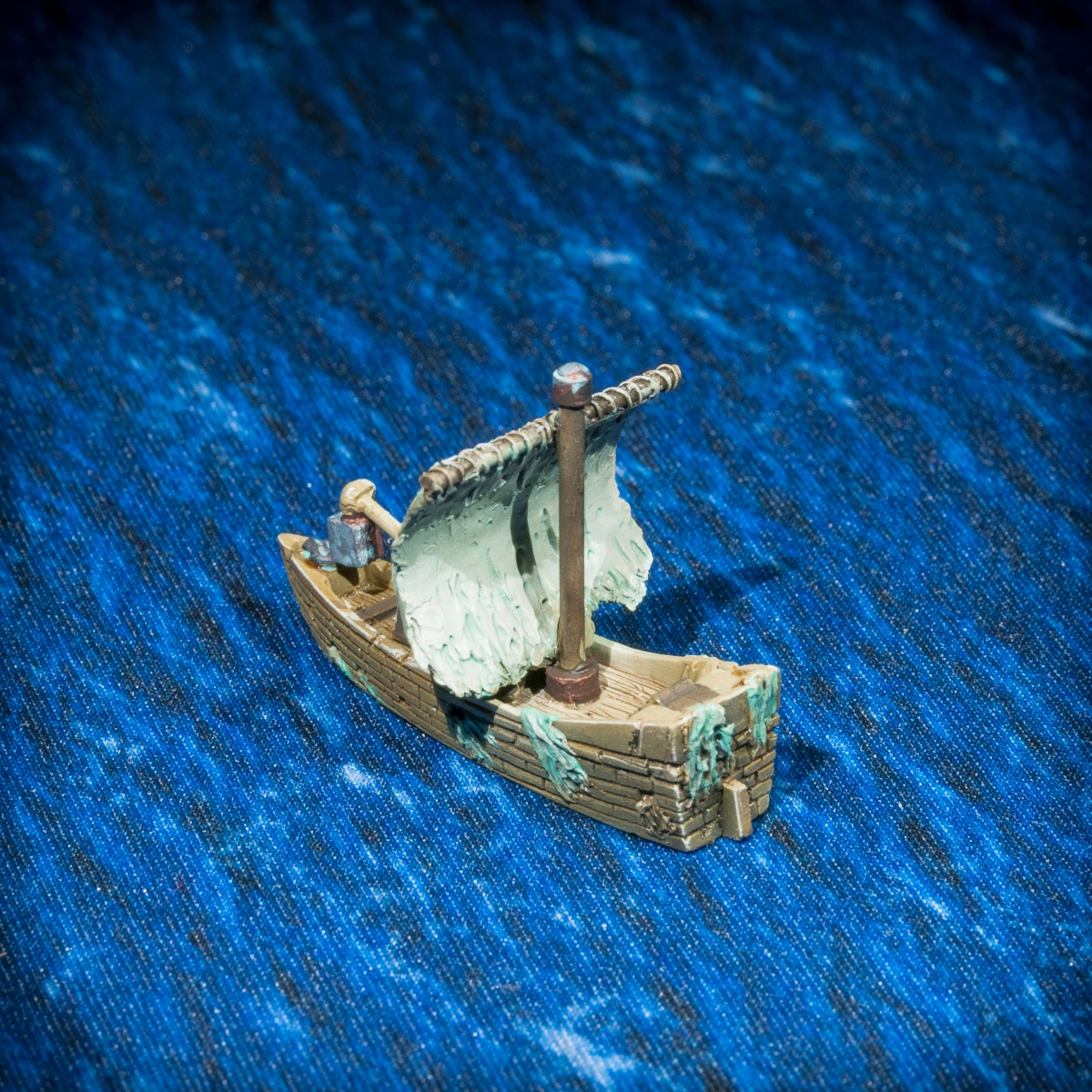 The most conventional of all undead battleships, Dreadships are relatively small sailed and maneuverable vessels mounting a single catapult of their front.

They appear as decadent and decaying ships, and are usually deployed in squadrons acting as fire support for larger and less maneuverable warships: the massive shape of the Drifting Mausoulem is frequently preceded surrounded by a small swarm of Dreadships.

Dreadship are usually crewed almost only by zombies, led by necromancer acolytes or simple apprentices: the death of those sorceress may cause those lowly undead minions to repeat mindlessly their tasks, without following any real battle tactics, and in the worst case to run amok attacking the living members of the crew.